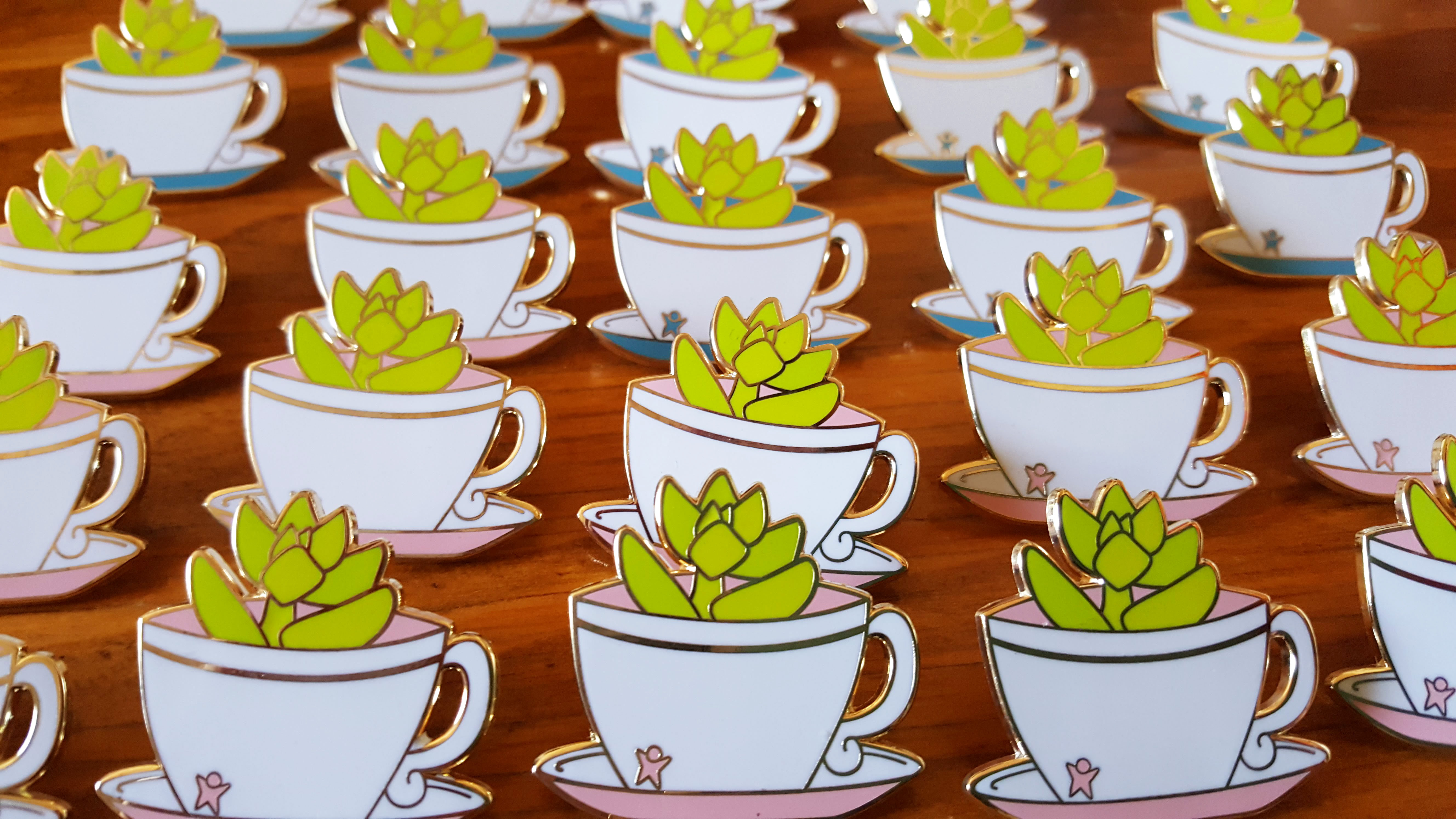 Kickstarter projects are all or nothing. If a project doesn’t reach its funding goal, it’s canceled and backers never see pledges taken out of their account. But in my first Kickstarter, I received funding for 2 out of 4 pin designs. How?

I used stretch goals, but perhaps not in the way Kickstarter intended.

The crowdfunding venue distances itself from stretch goals as not being an official part of the platform, but acknowledges their existence and value. But now creators are using stretch goals differently.

What is a Stretch Goal?

Kickstarter defines a stretch goal as “a funding target set by the project creator beyond the original Kickstarter goal.” These additional funds often add perks or upgrades to the existing project, like improving binding on a self-published zine or higher quality game pieces for a board game. They may also be separate from the project. Extra stickers, a free pin, or a bonus comic strip are all stretch goals I’ve seen creators offer.

That’s not the kind of stretch goal I used. I’m talking about stretch goals as a way of running a Kickstarter project.

Most projects on Kickstarter have one clear goal. They either get enough to print 500 copies of that comic book, record and produce that album, produce a revolutionary new type of ramen…or not.

Smaller projects are different. If your goal is to produce a set of 10 enamel pins, you could take the all-or-nothing route too. All 10 pins or nothing! Risky, but that’s the nature of Kickstarter.

But what if instead, you could collect funding for just some of the pins? And you didn’t have to meet your end goal to put some pins into production?

That’s the mindset behind using stretch goals for your entire campaign strategy, rather than just the extras.

How Does a Stretch Goal Based Campaign Work?

Rather than just write about it, let’s look at two examples. First, take my finished campaign.

I planned to create a set of four succulent pins based on seasons. I set my initial goal at $200 to cover the cost of a single pin. Being my first Kickstarter project, I wasn’t confident that I could get all four pins funded. Setting the official funding goal for only my first pin design was less risky. Nothing is guaranteed in a Kickstarter campaign of course, but I was much more likely to raise $200 than $1000.

I launched my project on March 5th and successfully funded the first pin March 12th – in exactly one week. And it turns out, stretch goals were the right call. The second pin design was barely funded – right before the project ended on March 28th.

Now let’s look at a couple of on-going projects. My good friend Reboops just launched her third (!!!) Kickstarter campaign. She’s aiming for a massive set of 20 pins based on characters from the game Overwatch.

As of this writing, she’s funded 11 pins (out of 20). Like my campaign, her initial goal was only set for a single pin. In this case, she isn’t planning any stretch goals beyond the set of 20, but has added extra pin designs to previous Kickstarter campaigns as she met her original goals.

Do all pin Kickstarter projects work this way then? No, and Shirley Jackson’s Chinese Zodiac enamel pins are a great example of a more traditional approach to a project. In this series, she aims to fund three pin designs and 12 zodiac animal screen prints.

Her stretch goals include two different color variants and an extra enamel pin (related to the Chinese Zodiac story). Although these are “stretch goals,” they’ll definitely get funded. This project was just released this morning but has already met its main goal! But I absolutely love Shirley’s work, so I can see why.

Update: A couple hours later and all but the final stretch goal has been funded. Woah.

Update #2: All stretch goals funded before I could get this post online!

While traditional campaigns aim to fully fund a project, stretch goal-based campaigns fund a project in steps. Neither is necessarily better than the other, but naturally, they both have pros and cons.

Running your campaign with your full goal as your official goal doesn’t have any significant advantages or disadvantages. It’s simply the default. Your audience will see exactly what your goal is, with no opportunity for confusion. You also inherit the all-or-nothing risk that’s inherent to the Kickstarter platform.

If you truly need the full amount of funding for your project, or you aren’t willing to create only a part of your project, use full goal funding.

A stretch goal set-up is perfect if your project is flexible and you’re unsure about your chances of success. A project targeted to a very niche audience, a relatively new creator, or a project where the first goal really is your primary goal are all good candidates for stretch goals.

With your initial amount set far lower than your full project goal, you’re far more likely to guarantee some amount of funding.

But one of the most notable but overlooked benefits of running a stretch goal-based campaign is excitement. Traditional projects have two high points: when your project is fully funded and when the campaign ends (and the project begins).

Stretch goals create several high points throughout your campaign. After meeting your first goal, backers can still look forward to the next goal or their favorite one. But note that this only works if you’re consistently meeting stretch goals throughout the campaign.

When planning a campaign based on stretch goals, not getting fully funded is a definite possibility. So be sure to set each goal high enough for each additional reward. When I give this warning the example I have in mind is my own campaign.

Because my campaign barely hit my second goal before it ended, I was able to offer that my second pin design to backers. I’m really glad I could. But on that last day, one person canceled their pledge. Kickstarter didn’t change the total amount to reflect that dropped pledge, so in reality, when funds came through, I’d actually raised a total of $389 and after Kickstarter fees, received $353.

On one hand, I’m glad my second design was “officially” unlocked and I could but it into production right away. But the funds just covered manufacturing costs, and I was left to cover remaining expenses like shipping myself. That’s the kind of oversight that I expect would be less likely with a full goal Kickstarter.

In the end, one type of campaign isn’t better than the other, but they suit different needs.

If you have a project (like enamel pins) that can be broken up into smaller goals and don’t necessarily need to be released as a complete set, a stretch goal-based project will work just fine.

But if your project needs the total amount of funding to be successful, can’t or shouldn’t be split into parts, or you want to manage a simpler campaign, full goal funding is the way to go.