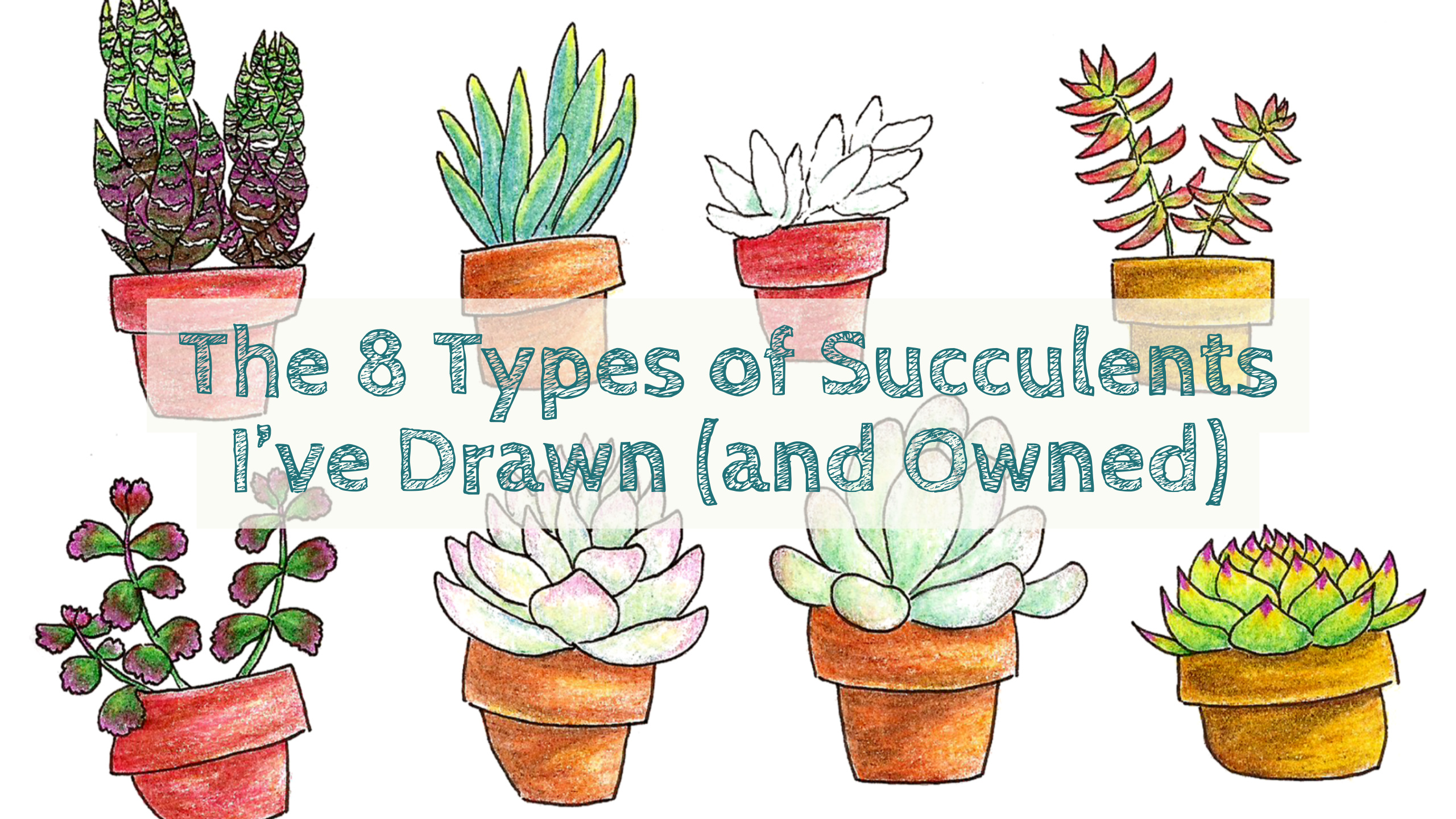 In building the foundation for an art business, I’ve been doing a lot more art. Naturally. What might not be natural is how much of that art has been of succulents. But the identity of plant addict is one I’m coming to terms with.

I saw an article a while back about how millennials are filling the child-shaped holes in their hearts with houseplants. Sure, I can go along with that.

Some of the most recent artwork I’ve done have been pages of succulents. Although I intended to use these pages as a way to draw a wide array of succulents, I filled a whole page with succulents I own or have owned…and didn’t even cover them all. This addiction might be worse than I thought.

But since each of these succulents has a story, I’ll share those baby pictures with you now, in one easily accessible blog post. Stick around (or scroll down) to the end to see a sneak peek at the second succulent page I haven’t yet posted anywhere.

Here’s the full page. 16 plants. 9 still alive and well, 3 in a questionable state, and 4 no longer with us.

The Ones that Started It All

These are the first three succulents I ever purchased. I picked them out from Home Depot (probably) and they’ve thrived on beginner luck ever since.

Writing an article about zebra plant succulents is one of the things that got me interested in succulents. So you can bet that I was looking for one of these. But none of my local stores ever seemed to have a zebra plant. Or if they did, it was part of a larger arrangement, which was just cruel.

Finally, on one bright day, I obtained my first zebra plant, from a Home Depot on the other end of town. They must have sold like hot cakes because I’d never find them in the same location twice.

Sadly, my favorite succulent wasn’t meant to be. Three have them have died on me. But love the way most haworthia succulents look, so I jumped at the opportunity to get this cool-looking plant:

It died on me too.

For the 4th of July, I bought red, white, and blue succulents. They looked amazing. Until the “blue chalk sticks” died off and the fuzzy white ones shriveled up. The red ones are another variation of Sedum adolphii. They’ve turned mostly green with less light indoors, but are survivors.

These two have similar coloring and are both sensitive. Apparently, they don’t like to be touched because the oils on your skin wear away their protective pastel coating. So any spot you poke has a permanently green mark that’s darker than the surrounding area.

I’m on my second pachyphytum. It was a scraggly plant with most of its leaves missing in the clearance section. Although my first pachyphytum died of sudden unknown causes, I like to think I’m making up for it with this “rescue plant.”

I love that there are fuzzy succulents. And that they’re all named after bears. But once again, I seem to have bad luck with these varieties. I got these three around the same time and arranged them neatly in a communal pot. The Bear Paws didn’t seem to like having roommates and didn’t last long. The Teddy Bear was doing fine but has been strangely stiff since the first freeze…

Meanwhile, my Panda plants seem to be surviving winter just fine and loving their space.

Near the end of last summer, I finally crossed a line. I order succulents online.

They arrived quickly, well-packaged and not at all harmed. Since these were hardy outdoor plants, I stuck them into a planter outside. For a few months, I enjoyed seeing them grow rapidly, produce chicks, and change color according to lights and temperature.

Then one not-so-cold winter day, I decided to eat my lunch outside. I glanced over to the planter where my outdoor succulents were and did a double take. There was NOTHING THERE. The planter was empty except for torn up leaves and trampled dirt.

I don’t know what animal did this, but I hope they got indigestion. If that’s a thing animals can get.

The One That Grew on Me

I bought this succulent because it looked different and then sort of regretted it. It looked like a regular plant. There was nothing cutesy or succulent-like about it. But I planted it in a wine glass with a cactus-shaped neck and let it grow.

This plant is surprisingly hardy. And the tiny baby leaves that pop up at the top are bright red at first and then morph into a violet-red/green gradient. It’s quite nice and is actually low-maintenance, unlike most of these other ungrateful succulents.

One of my plants came with a little sprout in the same pot. I assumed it was from another succulent and planted it in its own little pot. And that plant has grown nonstop. It graduated from a toothpick support to a chopstick and is still getting taller. The lower leaves have started to produce their own sprout. Any leaves that fall off seem to develop roots instantly.

Is this even a succulent?

I had a lot of fun drawing these – even though colored pencil blending takes forever. So much fun that I started a second page of succulents drawn from a top view.

Here’s a sneak peek before these hit my Instagram:

This site uses Akismet to reduce spam. Learn how your comment data is processed.