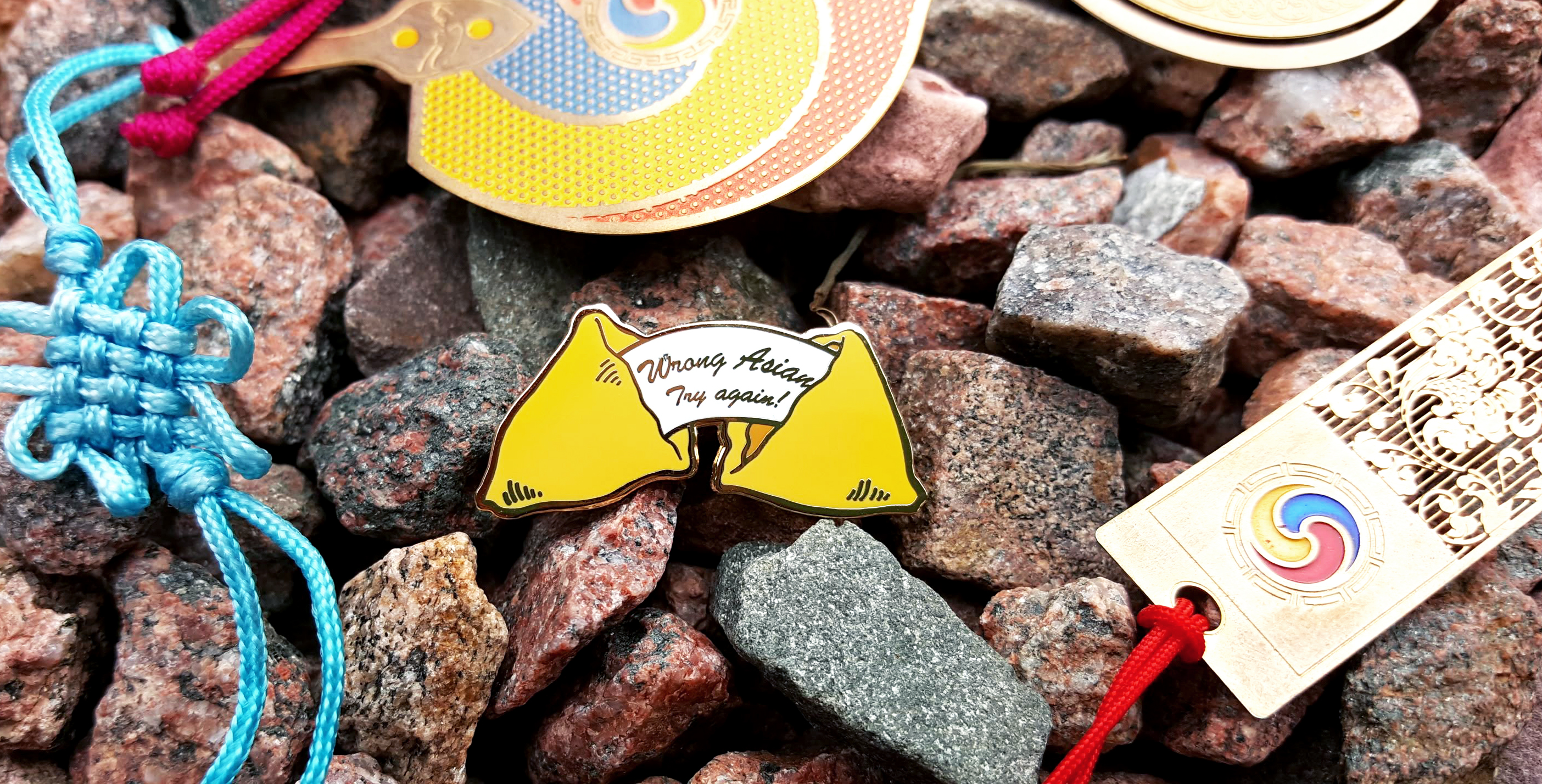 Excuse me while I blow the dust off this blog.

I admit, I’ve been fooling around with another blog. (Don’t tell, but I think I enjoy this art one more. I mean, I can write about anything I want, from emojis to succulents.)

These designs are a little less universal than my usual work (aka plants). As I share these designs, I’ve realized not everyone gets it. This is fine with me. But if you’re confused and wanting to learn more, I want to you to be able to do that. These pin designs are me starting the conversation. You can choose to engage, or not. And if this isn’t enough, there’s always Google.

The design I’ll talk about first is Wrong Asian.

First, I have to give a shout-out to designer Linh-Yen Hoang. Her pin was the first time I saw this idea expressed on a pin (and I hope it won’t be the last!) If you haven’t seen her design, check it out! Last I checked, it was back in stock.

So What Does “Wrong Asian” Mean?

Wrong Asian is the more self-explanatory pin of the two. But again, I’ve realized I can’t just assume. Plus, there’s a lot of background to this pin and I like talking about it. This is a fun moment for me where my interests in art and sociology merge nicely. Get ready while I geek out for a bit.

Asians occupy an interesting place in America. Although Asian-Americans are often seen as having “made it” – into good schools, better paying-jobs and higher income brackets than their Black and Latino counterparts – they also face the stereotype that they are always foreign. Asian Americans may be considered a “model minority” (a myth btw) but they are also “perpetual foreigners.” This is clear in cases when second- or third-generation Americans of Asian descent are still asked “where are you from?”, expected to speak a foreign (Asian) language, and are asked for stories about “their country.”

Non-Asian Americans often mix up Asian Americans, regardless of actual appearance. Even when this mix-up is a mistake, it can still be hurtful to realize that others see you primarily by your race. But there’s a reason we tend to mix up people of different races or ethnicities than our own.

The Brain Science Behind Mix-ups

People who grow up in neighborhoods with a large Asian population are better at distinguishing Asian faces, regardless of their own race. The same is true for individuals who have spent a lot of time around Blacks. Or whites. The difference is that white faces in America are everywhere, from our politicians to comedians to lead actors to picture books. Even if we don’t live in predominantly white neighborhoods, Americans are constantly exposed to white faces.

But because we often have less exposure to people of other races, we aren’t as good as distinguishing between them. Researchers have called this the cross-race effect and it’s been very well-documented.

The good news is, even though the tendency to call on the “wrong Asian” is backed up by “science,” we aren’t stuck with this problem. People can get better. Spending time around people with different racial and ethnic backgrounds than your own improves your ability to distinguish between Black, Latino, or Asian faces. Even if you don’t live near or in diverse communities, one study finds that putting more effort into distinguishing between individuals improves facial recognition across race. Specifically, focusing on an individual instead of allowing our brains to simply place them into a category reduces the cross-race effect.

In other words, the human brain is smart. We can learn. We can do better.

I’m far from the only person who has written about this. If you’re interested in reading more, here are a couple pieces I recommend:

Jenée Desmond-Harris: “No, Neither Asians Nor Blacks All Look Alike”