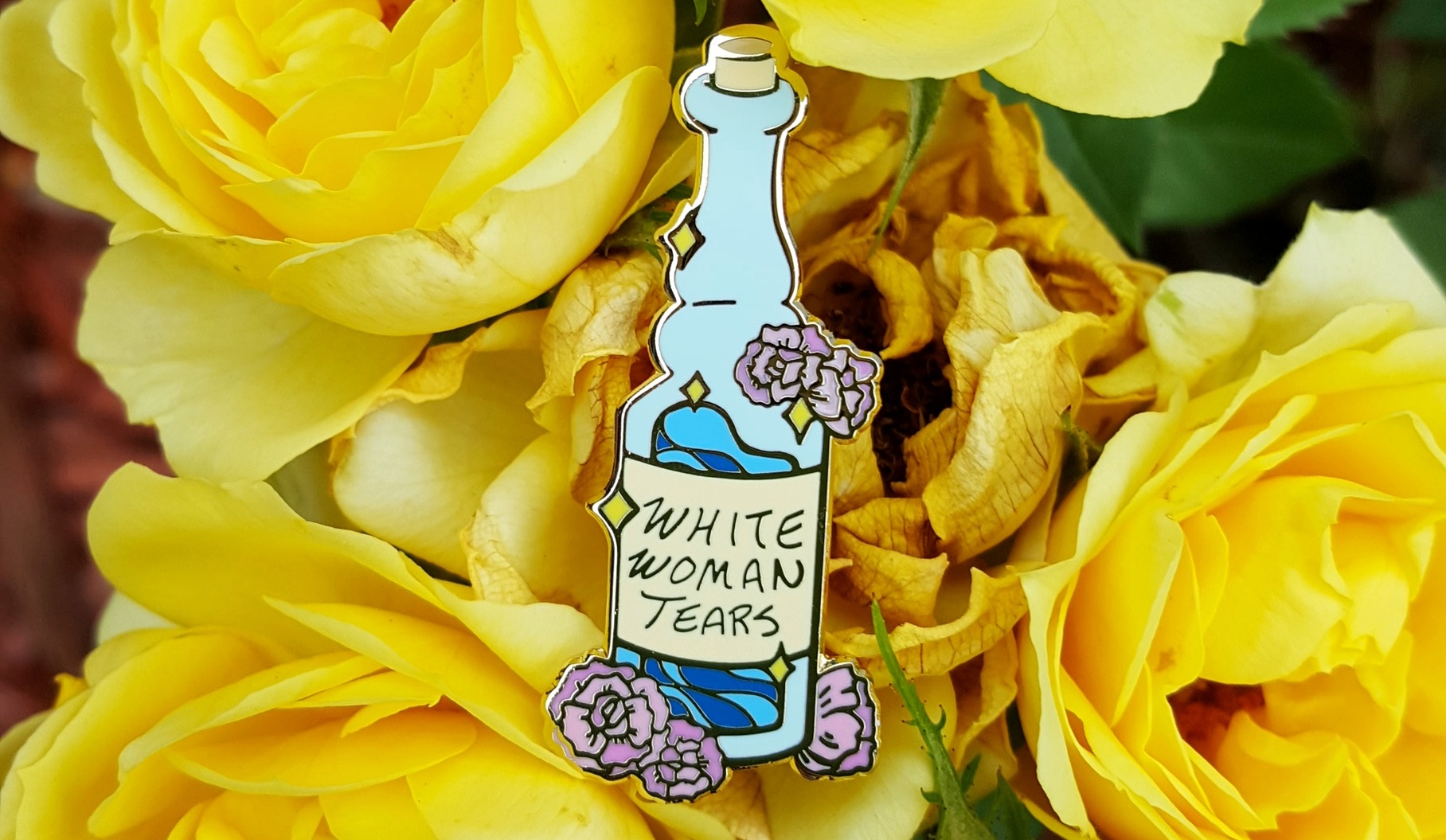 The second pin I released recently is less intuitive for some people.

There are explanations of “white woman tears” online. I want to add to that because 1) I think more people talking about the themes behind white woman tears is a good thing and 2) I want to have a resource I can point to when people ask about this pin.

Before we continue, a note. I’m not white but I’m a light-passing minority. I’m sometimes seen as white, sometimes not. It’s all about context. Maybe I’m “Almost White,” as comedian Rick Najera titled his memoir. The point is, I want to acknowledge my position before I dive into this topic.

Is This Pin Making Fun of White People?

First, there’s humor in this. Someone online asked if this pin was “serious” and said that they really hoped this was a joke. I didn’t know how to respond. What would this pin being “serious” even mean?

Yes, this is a joke. A longstanding one. But one with serious meaning behind it. We can go into varying levels of seriousness. I’ll even label them, so if the higher levels are too much, you can always scroll away.

On a super surface level, you could interpret this pin as just being about privilege. Think #firstworldproblems and crying over small things.

But with White Woman Tears, we’re talking specifically about white privilege. It’s hard to find a definition, mostly because a simple definition isn’t enough. But first, that definition. An article from Teaching Tolerance uses this definition from author Francis E. Kendall:

White privilege means “having greater access to power and resources than people of color [in the same situation] do.”

Maybe you have some thoughts about that definition. (Actually I hope you do; that’s what our brains are for.) Do you find yourself questioning it? Are you pulling up examples that contradict this definition? Are you wondering how poor whites fit into the equation? Or how privilege can apply to someone who’s worked hard for everything they have?

Good, because then we can have a conversation.

I said earlier that defining white privilege isn’t enough. That’s because even when defined, people don’t get it. That same article puts it well:

“The two-word term packs a double whammy that inspires pushback. 1) The word white creates discomfort among those who are not used to being defined or described by their race. And 2) the word privilege, especially for poor and rural white people, sounds like a word that doesn’t belong to them—like a word that suggests they have never struggled.”

It’s almost easier to define all the things white privilege is NOT. So if you’re interested in delving into the topic further, I challenge you to go through “What is White Privilege, Really?” and skim for what is not white privilege. They’ve included a good amount of history there too.

If stories are more your style, Lori Lakin Hutcherson has the done the work of sharing several of her own, complete with bolded takeaways at the end of each example. Definitely a worthwhile read and you can just pretend you’ve fallen down a Facebook rabbit hole.

I wasn’t intending to spend much time on Level 1 here, but white privilege is complex and worth understanding.

The main idea behind White Woman Tears is that white women cry to shut down hard conversations.

I want to be clear. We’re talking about a specific circumstance here. I’m not referring to anytime a white woman cries. White Woman Tears come into play when a conversation is about a difficult topic, often one that acknowledges privilege. In this scenario, a white woman in the room (or multiple) gets defensive. Defensiveness isn’t always a concept you can identify visually. Maybe it just looks like someone getting emotional. So on the surface, it looks like this white woman in the room is getting emotional. Which may or may not lead to crying.

There’s a video in this Guardian article that demonstrates the point well (it’s the Jully Black and Jeanne Beker YouTube video). In this clip, there is no crying, but you can see the defensiveness rising, which Jully Black is quick to point out for what it is.

White Woman Tears is a thing. It’s a big enough thing that it’s a cultural phenomenon. Googling it turns up with far more relevant pages than “Wrong Asian” (the topic of my last post). White tears is also a thing, but let’s face it, toxic masculinity usually paints tears as feminine.

This might be a good time to pause and address some disclaimers, before anyone has to waste their energy tapping out a #NotAllWhiteWoman. Of course, not every white woman does this. Of course, white women aren’t the only individuals that have done this. But white women do this. A lot. Consistently.

I need us to agree on this point, even temporarily, to continue this discussion. So even if you don’t agree, humor me for a bit.

Crying during a difficult conversation isn’t just about crying. Especially when the person crying holds considerable privilege (see Level 1) and the person bringing up the difficult topic does not.

Crying stops a conversation in its tracks. Crying changes the course of the conversation. Crying distracts from the issue at hand. Instead of addressing the harm or injustice that was brought up, crying puts all the attention on one individual, portrays them as the victim, and elicits sympathy from others in the room.

Many topics are bigger than one person’s feelings.

But crying during important conversations prioritizes one person’s discomfort over everything else. Over inequality, racism, life-harming and life-threatening circumstances (more on this last point in Level 3).

We’ve talked about how white women are the ones most likely to do this. There’s another piece of this pattern. Because crying calls attention to another party – the person who caused the crying. If the crying person becomes a victim, the one who brought up the “sensitive” topic becomes the bully. And too often the one made out to be a bully is a Black person.

People are quick to jump to this conclusion. It’s easy to see a crying white woman as a victim (see: pretty much every damsel in distress ever). It’s also easy to depict a Black person as scary, intimidating, and overly angry. I can only cover so much in one blog post, but I hope the links throughout and at the end of this post help.

To sum it up, White Woman Tears are a manifestation of privilege. They represent the ability to avoid conflict and discomfort by calling on stereotyped ideas of white womanhood as delicate and frail.

During periods of US history, White Woman Tears were life-threatening.

An example in two words: Emmett Till.

In Till’s case, a white woman claimed that the 14-year-old had whistled at her. A group of white men killed him in response. His case was not unique. The NAACP draws makes the life-threatening nature of White Woman Tears clear:

“Whites started lynching because they felt it was necessary to protect white women.”

Another poignant quote from scholar and activist Danielle Slaughter:

“The most dangerous person in America isn’t the Black man or even the white man. It’s the white woman.”

Those damsels in distress mentioned earlier? They have more power than they know. There are several documented cases of Black men being harmed, imprisoned, and killed based on the word of a white woman. There are certainly far more cases that went undocumented. Going through these events is grueling and I’m getting tired. But please look into it if you’d like to know more.

And while we might seem far beyond historical events, consequences persist in different ways today, like when white coworkers got this reporter fired for sharing an article on white tears. The loss of a job isn’t life-or-death, but it is your livelihood.